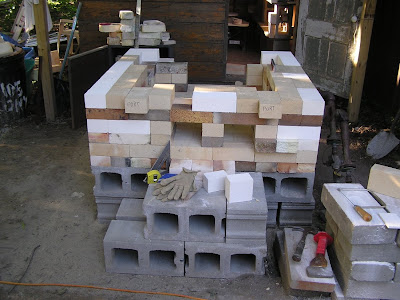 It's starting to look like a kiln! Tomorrow I will finish the layer above the burners, which contains the burner lintels, and two soda ports. After that it is smooth sailing until it's time to build the arch; at which point I have another anxiety attack scheduled. The burner ports and the flue all look gigantic to me, but they are appropriately sized according to Olsen, and anyway it's easy enough to make a port smaller if need be.

Some mistakes I could have made, and didn't:

While I was at INFAB purchasing the extra long brick to make the lintels over the flue, I asked the nice man to chop one of my own 3-inch brick in half. I didn't even have to play the cleavage card! (Just kidding. That card is a bit tattered these days.) He agreed so readily that I wondered if I should have asked him to cut a few of them; but that would have been pushing my luck.

So anyway, tomorrow I will be cutting hard brick with my trusty chisel. Only a few...but that's a few too many. It's supposed to be 87° out, so I might take the afternoon off and head down to the river for a swim.