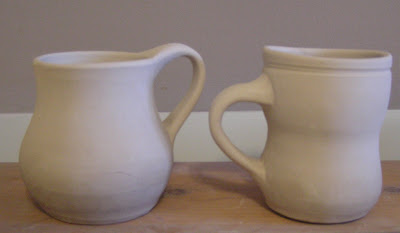 After the firing(and all the random distractions) knocked me out of my groove, I think I lost my nerve a bit. I made the first seventy-five, boom-boom-boom, one idea suggesting the next; but when I came back to the wet end of the cycle, I found I was having trouble coming up with different mugs. I put it off for a little while, but finally decided the only way to do it was to do it, and risk making a few redundant or bad mugs, in order to get back in the groove. I also decided it was time to get (funnily enough) way out of my comfort zone, and make some mugs which were plain, with no alteration, stamping, carving, or slip-trailing. These I will plan to do some brushwork on, with glazes; not my forte. My hero in that skill is Carl Erikson, of North Main Studios in Stillwater, Minnesota. Here are a few of Carl's pots: 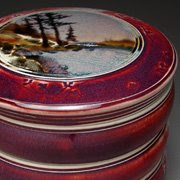 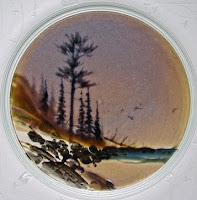 I have no illusions of creating anything quite so impressive, but again, this excercise is pushing me into territories where I wouldn'nt normally stray.