Shots from the last firng 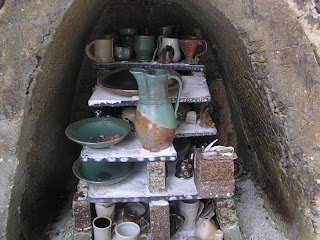 It seems like such a ling time ago now, but I unloaded this kiln last Sunday. All of my new surfaces were successful, and later when I am not so lazy I will post the recipes, with examples. In the meantime, here's the overview. 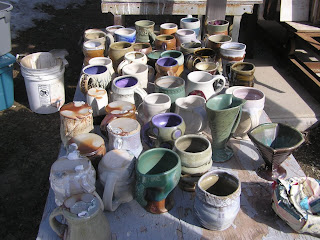 I used 2.5 pounds of baking soda and 2 pounds of soda ash this time. It was enough to make things juicy without getting those giant goobers dripping from the bottom of the kiln shelves, which plagued the last firng. Another change: after body reduction, I kept the flame almost neutral: just an intermittent tongue. This was because I got a lot of dark body color last time, and some steel gray where the soda was generous. I like steel gray, don't get me wrong, but I wanted some variation; and I am not crazy about the dark brown body color. The toast/suntan shades are why I love soda. So, minimal reduction on the climb. What I learned: the amount of reduction necessary for good reds is too much for good body color. The amount that gets me the yummy suntan colors is insufficient to develop good reds, at least on the outsides of things.

I did lose a pot. (I've never had a firing in which I 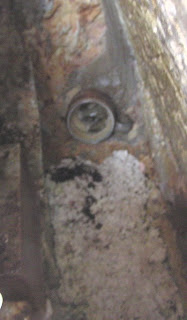 didn't lose something, except back in my low-fire days.) This mug fell from the shelf -- I must have knocked it with the angle iron while applying the soda mix. It fell into the channel and was cemented in place. Too bad, too, because look at it -- it totally would have been the fattie! 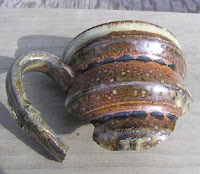 Wow, some nice colors in the group shot, like that purple and green one and the white one with the squiggles down the sides and handle. Too bad about the broken one - it is really toasty.