Trying Something New (Edit: Nope, no, I'm not)

When I find something that works, I tend to stick with it, particularly when it comes to firing. Failure is just too expensive! I have been wanting for a while now to try a new method of soda application, but it has taken me years to buy the one, very readily available piece of equipment that I need: 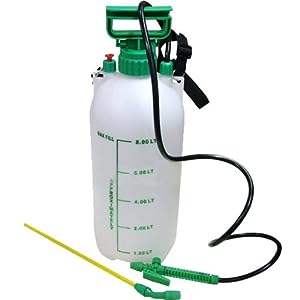 Yup, that's it: just a weed sprayer. Many, maybe most, people who fire with soda use the spray application method. I use the Gail Nichols method of mixing my soda ash & baking soda with wood curls and water, and dumping it into the kiln on a length of angle iron. I like that method for the direction effect it creates, and the additional carbon in the kiln for the soda vapor to trap. I've done the weed-sprayer method before, in Watershed's soda kiln, and it resulted in a very even coating of soda glass, almost like an applied glaze. Like having more than one rib or trimming tool, however, I think it would be good to have a vocabulary of soda-application methods: different means for different effects.

I have a couple of points of hesitation about using the spray method, one being that there are some Advancers in the kiln, and they do not react well to the sudden and uneven cooling that being sprayed with water during the firing might create! It's a risk, but because my soda ports are so low, I don't think the Advancers will take direct spray. And, about those ports: they were really constructed for the angle-iron method: low, so the wood chips get dumped directly into the flame. I am not entirely sure the spray method will work as well to get the soda up onto the ware. A dry firing would be a major (and spendy!) bummer.

So I'm going to hedge my bets, and apply the soda both ways for this firing. I'll weigh out a little bit extra - further hedging - and apply half via spray nozzle, half via angle iron.

Though it is only Friday, it will likely be more than a week before I see the results of this experiment, because I am in Portland Monday & Tuesday to teach my classes, and early Wednesday morning I am leaving for NCECA. Very nervous about my turn on the Process Room stage, but also very excited!

Hope to see you there. When I get back I will post the hopefully-fabulous-but-who-knows photos from this firing!

ETA: ARRRGH! The weed sprayer that I bought has a brass nozzle - fine - but the hardware that attaches it, and the tube it is attached to, are plastic. So, obviously, not going to work! I am applying the soda in my usual way, but keenly disappointed not to get to try this out. I didn't even ask what the bits were made of because every other one I have ever seen has been metal. Probably because the only place I've ever used one is at Watershed, or at another potter's studio. Damn it damn it damn it.