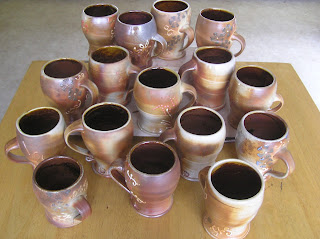 I had hardly deplaned before it was time to head off to a meeting of the Central Maine Clay Artists to plan Mug Season, a fundraising event we do in conjunction with local coffee shops every spring (known as Mud Season, in Maine; get it?) to benefit local arts programs.

It's kind of a three-way fundraiser: the coffee shops supply free coffee with mug purchase, the customer buys an $18 mug where maybe they had only planned to spend $2 for a cup of coffee, and we, the artists, provide mugs, at a bargain cost. It works for us, as these are typically mugs that we've had kicking around the studio for awhile - you know, the ones that just won't sell for some reason.

This year I approached it a little differently, as I didn't have any mugs that wouldn't sell - I've even sold almost all my demos. So I made some mugs specifically for Mug Season.

These have simpler decoration than most of what I make. I sometimes have a hankering to do that anyway. I do love me some highly decorated ware, but once in a while I like to let the flame do more of the work. Some of these have only flashing slip, others have a bit of slip-trailed floral design, and all of them have a lot of directional patterns from the soda ash.

I'm pretty sure I am missing one - I think there were eight - so will update this list when I figure out what it is.

In other news, it was announced that NCECA will be in Pittsburgh in 2018. Yay! Portland, OR is right out, for me, barring a lottery win or similar, but Pittsburgh? that's doable.

I kind of think every other year might be better anyway, from both a financial and experiential point of view.
Posted by Lori Watts at 3:10 AM