You can never tell where your next great idea might come from, although Pinterest is a good bet. That's where I got this one. It was on a blog dedicated to Christmas projects - I think?? It's in French and I am, sadly, unilingual despite growing up in Maine where half the population speaks French. (Well. Not half. About five percent of families speak French at home.) I've often wondered why nobody here wigs out about all the signs reading "Ici on parle Francais" the way they do elsewhere about the Spanish equivalent. I guess it's just what you're used to.

ANYWAY. Enough about my linguistic deficiencies, moving right along. THE IDEA! is this: 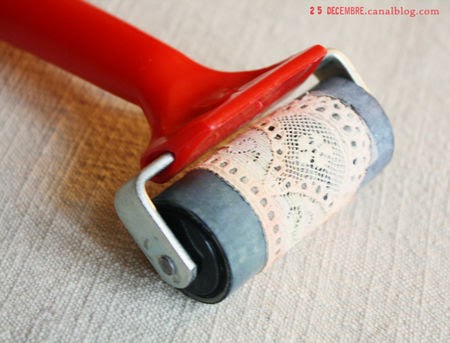 In the original, it was a suggestion to make your own gift wrap. I think it would be great for texturing slabs or
printing with slip or glaze.
Quick, somebody try it & send me a photo!

Today I am throwing. Lidded casseroles for sure, perhaps those days-of-the-week mugs I mentioned, some jaunty jars and a cake stand for an order. Though yesterday still felt like summer (until the sun went down!) I am beginning the last of my Christmas orders. If they don't get 'em by mid-November, they don't want 'em!

That is just brilliant!