Pots from the Last Firing

I was pretty excited while I was unloading this last firing: the colors were brilliant, the soda glass was generous but not gloppy, and if there were more kiln kissed than usual, well, what are ya gonna do? It's all part of the process. I was excited, that is, until I started doing the final finishing before sending them off to stores: sanding the bottoms, testing handbuilt pieces for leaks, checking for warping and cracking. Speaking of cracking... 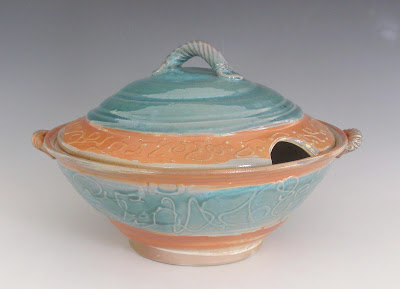 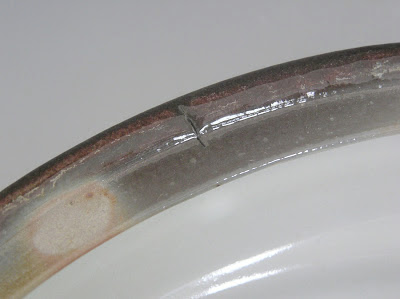 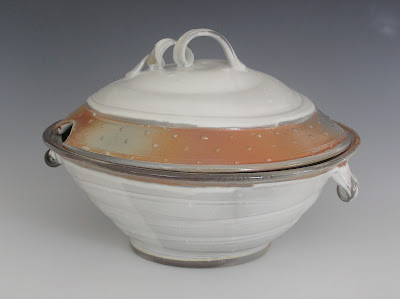 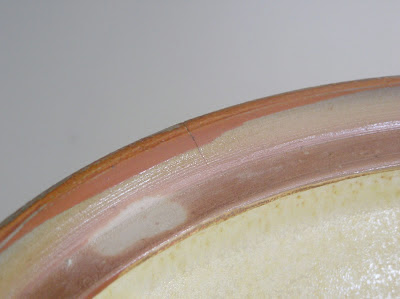 Two of the three large tureens exhibited tiny cracks at the rim. The cracks are not structural - the pieces still ring if I tap them with a pencil - and they wwon't compromise the function. But a crack is a crack, and the tureens are instantly rendered unsuitable for sale in stores. Seconds. Most likely these were caused by handling too early (or too late?): when the piece was not yet rigid, but was too dry to accommodate any deformation of the rim. Those cracks were probably there, in microscopic form, before the pieces even went into to bisque. My language was more colorful than usual when I discovered the cracks("Aww, fuck me with a phone pole!") but that lasted moments only; I am always more sanguine once I figure out why something happened. And then I discovered that 4 of the 6 plates for an order had warped; the air turned blue.

There was other warping in the kiln, as well; probably about a third of the firing were seconds. But hey, the glass is 2/3s full, right? Here are some of the successful pieces: 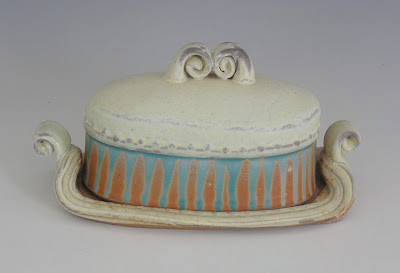 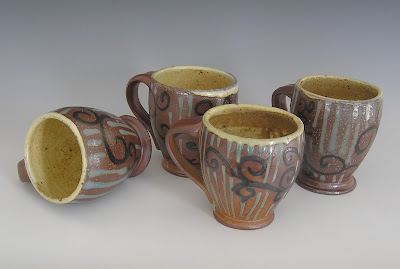 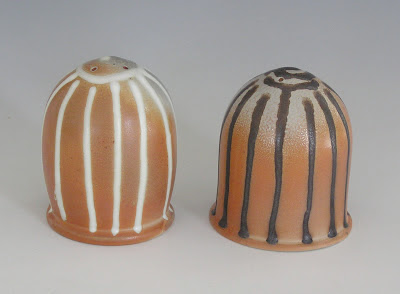 The butterdish and mugs will be headed for Portland Pottery; the salt and pepper shakers - there were four or five sets - will be available on the website; or purchase right here, if you'd like!

With a phone pole eh?
Sorry to hear about the plates. Any idea what went wrong with them, why they warped?
At least most of it came out good. The tureens came out nice, even with the cracks.

Hate when that happens; but at least you're able to quickly change gear and looks at the kiln 2/3 full. :-)

This is another place where I ask about when it's a second. One of the guys I wood fired with recently said, "If it pings when I flick it, I'll sell it", and he didn't even mean as a second. To him, as long as it wasn't structural or ugly, sell it normally.

I do wonder if that projects poor craftsmanship. Even if we tell consumers it's fine, will they believe us or doubt our craft?