Some Mugs Out of the BIsque 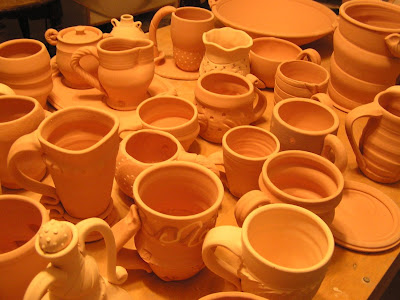 I once heard a quote attributed to Toshiko Takaezu saying something to the effect that she feels pots are alive when they go into the bisque, and dead when they come out; and it's her job to bring them back to life with glaze and fire. I understand how she feels. I've always hated the bisque stage. I hate the horrid pinky color (even the slight pink of white claybodies) and the feeling of it is like a tactile version of fingernails on a chalkboard.
Nevertheless, these are the first of the 100 mugs, out of the bisque, dead and awaiting reincarnation. I am surprisingly hesitant about glazing these pieces; I feel like my beginning students, whose pots are still so precious to them that they can barely stand to consign them to the glaze and fire, with its uncertain results. Of course, half the issue for them is unfamiliarity with glazes and application; you wouldn't think I'd have that problem. No, in this case, it's that I so want these mugs to be something special. that my standard palette of glazes seems...I don't know...insufficient, somehow. Between the flu and the IPTOG, I haven't had time to test new glazes, and now the firing is upon me. In addition, I have a friend's 40th birthday to attend tomorrow, and in-laws coming to visit on Saturday, the same day I am loading the soda...Arrrgh! My head is going to explode. Better go glaze before that happens.
Posted by Lori Watts at 3:34 PM

I sure would be intimidated by each one being different and each one needing the special treatment all at once, but the mugs' shapes are wonderful and your glazes will look great on them.

The nails on a blackboard comment is spot on and made be chuckle and shudder at the same time. I can totally understand your angst about glazing. Just take a deep breath and do it. The worrying is worse than the doing.

"Just take a deep breath and do it." Good Advice that I intend to follow! Thanks Jerry.