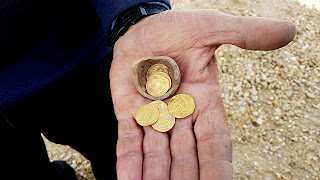 This month archaeologists made an intriguing discovery at a dig near the Israeli city of Yavne: a site of an unusual number of kilns, and at the mouth of one of the, a small jug containing seven gold coins:


A hoard of seven ancient gold coins was found hidden inside a small clay juglet during a dig in the area of Yavne, in the central region of the country, the Israel Antiquities Authority said Sunday.The coins date back to the Earlier Islamic period of the seventh-ninth centuries CE. They were found last week at the entrance to a kiln at the site.“This may be a potter’s personal savings,” the IAA said in a statement. The jug, which was partially broken, “may have been a piggy bank,” it said.

Seven coins. Sounds about right! My own personal clay bank contains more than seven coins, but not many, and none of them are gold; still the parallel remains. Part of my interest in ancient clay is the reminder that in so many ways, people are just people: so much in common even across millenia. 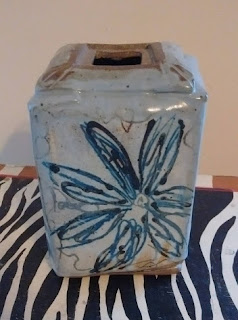 The coins in Yavne were still in the bank; I hope this means the potter lived their whole life secure in the knowledge that they were there if needed, and yet they were never needed. Across the temporal distance between us, I wish that potter well