Halfway from Kiln to Kitchen 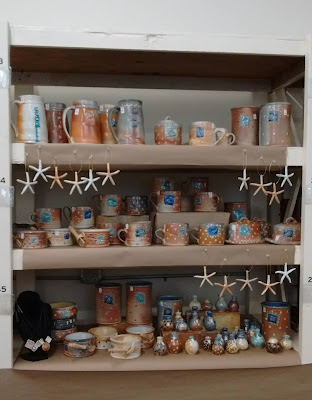 Squeezing it in just under the wire, I unloaded  -well, mostly!- a glaze kiln yesterday morning, quickly spiffied up the bottoms, priced 'em, packed 'em, and drove 'em all down to Portland Pottery for the holiday show. I didn't have much time to think about how I would display them, which changes every year for this show, as my display space is different.

I did have the presence of mind to throw a few kiln bricks into the car, knowing I would need risers to create some variation in the space. Beyond that I decided I'd figure something out on the way down. And I was right! The studio had rolls of brown paper, and the soda-tinted kiln bricks complimented the pots very well. Sometimes half-assed is best! I only wish I had know I'd have access to an electrical outlet; I could have strung some lights on the undersides of the shelves to brighten things up.

I had noticed during the firing that one of my shelves had broken. By the time it happened, we were well into body reduction - too late to turn it off if I wanted pots for the show, and anyway, it seemed likely that any pots ruined by the break were already ruined. I had reason to be optimistic about minimal damage - this is not the first time I've had a shelf break mid-firing. My optimism was well-placed: only one pot was damaged by the cracked & tilted shelf. the angle of it was quite astonishing - you'd have thought they'd all slide off into the burner channel, but only the pot the broken edge came to rest on was ruined.

Anyway, the opening night party was awesome as usual. By tradition, I overdress for the party, mostly because I rarely have occasion to wear my fancy clothes & hats. This year I used one of my ordinary hats, though, and just stuck a big gold silk poinsettia on it. 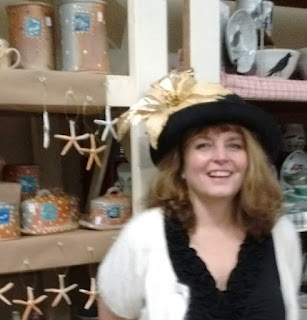 I said at the top of this post that I had mostly unloaded the kiln; because I was pressed for time, I unloaded only the things I needed for the show. Still have to get a couple dozen cat urns, which need to be ground, packed & delivered to the customer today.
Posted by Lori Watts at 7:01 AM