Yeah, That Was Me 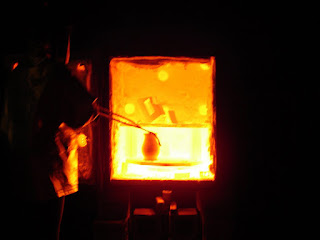 ...firing a raku on the hottest night of the year.
At least I hope it will turn out that was the hottest night! I kind of feel cheated: May and June are two of the three nicest months in Maine - the third being September - with temperate days and cool nights. This year, and last year, we had 45° and rain right up until we were catapulted into the 90s. Temps in the 90s are not supposed to happen in Maine! Or at least not for more than a few days each summer, in late July or early August. It plays hob - HOB, I TELL YOU - with the gardening season. I'm hoping things will mellow out in the next few days.


Nevertheless, the raku must go on! Well - technically that's not true, I've cancelled raku for all kinds of reasons, often weather-related, once mostly because I was just not feeling it. 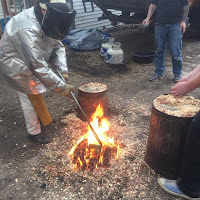 It was sweltering, but we got some amazing results. I had all beginners! But they listened well and followed instructions, and we got some of the nicest copper lustre results I've seen in a while. The students have since taken theirs home, but mine are still at Portland Pottery, for people to check out. .

If you are thinking about doing a raku firing or taking a workshop, let me share a couple of things with you to make it a better experience:
The first couple are safety related:

These next apply more to workshop situations than private firings. In a small, one-person kiln, some things are easier than in the large kiln, so these suggestions don't apply in those cases. If you are firing your own kiln, handlling your own tongs, put in any size pieces you want, for example! These are more like workshop etiquette:

I'll post some photos of the ware and a fabulous raku glaze recipe here next week.
Posted by Lori Watts at 1:58 PM