This was a crap firing. There were way too many kiln-kisses gone bad, turned into big honking goobers and crusty woogies, rendering otherwise nice pots into seconds. This firing was a bad kisser: too much tongue, mouth too wide, engulfing the lower half of your face. I am bummed, and more than bummed: I was counting on these pots for two outlets that are awaiting inventory. Not everything sucked, of course, so I will be able to bring them some, and more later, but the selling season in Maine is so short. They need work now.

I read a blog post by Carter Gillies, a fine potter from Georgia, which he wrote just after a disappointing studio sale. Carter reflects on the precariousness of his situation, and he might as well be talking about mine. Though he was downhearted in the post, I finished reading it with a lightness of heart, as I had been relieved of a burden: it's not just me. Because sometimes I see all around me potters who seem to be doing very well, and I think: maybe I just suck at this. But I look at his pots and I read his philosophy and I think, if a great potter like that is struggling, too, then no, it's not just me.

I feel like I am always one car calamity, one bad firing, one lost account, from ruin. But looking back, I have survived all those things. I call it "riding the ragged edge of disaster," and it may be my superpower. (I probably am just one serious illness from calamity, but I have much company in that, and it reflects a systemic ill more than any failure of mine.)

Anyway! Even a blind squirrel finds a nut once in a while, and this firing, while disappointing, did produce some nice pieces.All of the salt and pepper shakers look good, lots of good refrigerator magnets and buttons...
I'm gonna go weed the garden. I need to tear something up. 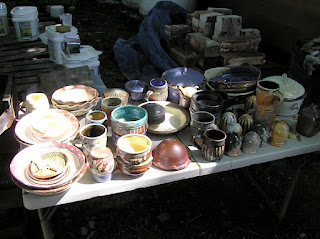 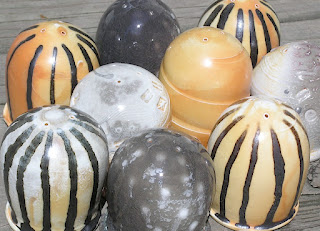 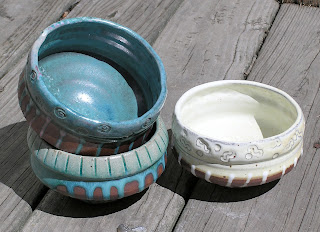 Such a bummer. Sometimes I get depressed just loading the kiln because I know all my hard work is on the line. Some weird part of me thinks if I'm expecting the worse, it won't hurt so bad if I open the kiln to disappointment. BTW.. I had to laugh at your bad kiss description.. it reminded me of my first kiss. Yuk!

We have all shared similar feelings, us potters who look forward to our babies coming out with perfection blessed upon them...only to find the results are closer to nightmares. Isn't is a relief to hear that the pros have the same things happen as those of us who are still more or less newbies.

Just like you get validation from Carter some of us get validation and inspiration from you. Working in such a volatile craft can be frustrating and discouraging at times. But getting that delicious, perfect kiss that you can feel all the way to your toes is what keeps us going. =D