The other morning, I woke up from a dream of a pot; kind of a low, diamond-shaped pot, one I've never made before. The image was pretty clear, down to the rim and handle details. I immediately did a sketch of it, so it wouldn't slip away the way dreams do. The obtuse corners were rounder than they would be it I'd cut and reassemble the sides, but sharper than if I'd just squared off from the inside with a fingertip. I had an inkling how to go about this, and I made the first one with my class on Tuesday. The shape still held some fascination for me, so yesterday, back in my studio, I set about refining it. Here's how it went:

First, I threw a bottomless ring. I started with three pounds of clay, which made a ring about the diameter of the wheelhead. 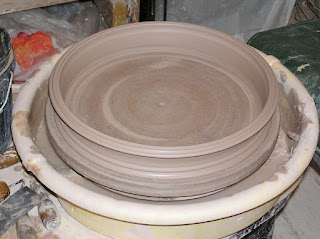 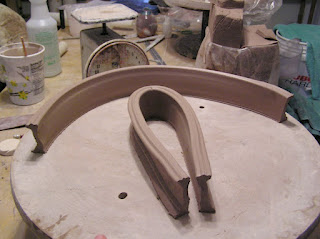 While the ring was still on the bat, I cut it in half. I then folded the halves to mark the center. 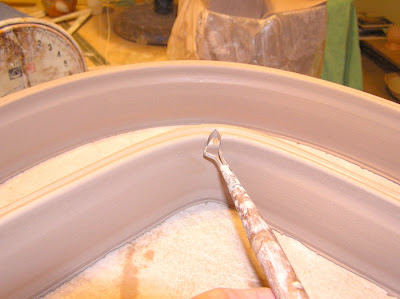 Using a trimming tool, I cut a small notch out of the inner side of the ring, at the center point. 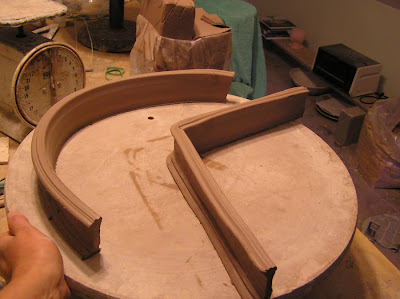 I bent the piece along the notch, making an obtuse corner. 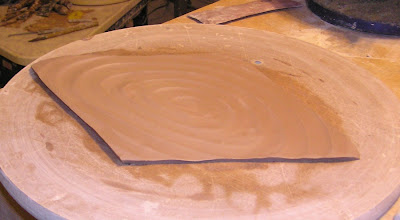 I threw a flat pattie of clay, with a deep finger spiral, and then stretched it into an oval, and cut the oval into a diamond which would match the bottom of the walls. 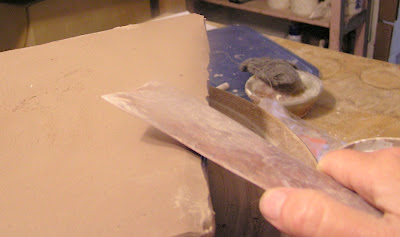 After the appropriate scratching and slurrying, I paddle the bottom to help secure the joint. 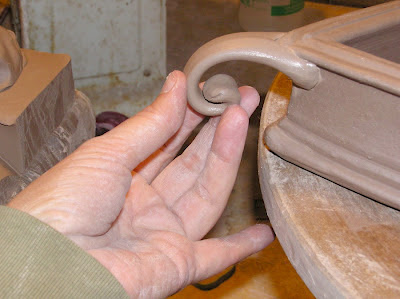 The handles are pulled and then rolled into spirals. 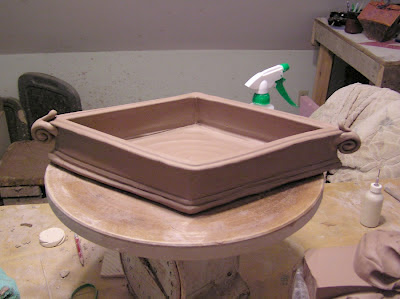 One of my students asked me,"What would you use it for?" Actually, I don't know. Some shapes just want to be made. Sweet dream, baby.
Posted by Lori Watts at 1:29 PM

Outstanding! Am enjoying your blog. Thanks!

I see it full of veggie lasagna or spanakopita. Very cool.

Great spiral handles, I could even see a flower arrangement in the middle of this one perhaps camellias floating in water.

Oh, the "What would you use it for?" question... My favorite answer will always be, "Whatever the hell you want."

Seriously, though, I find that no matter what I think about, the people with the pots I've made have better ideas than me.

Two weeks ago I saw a couple who have one of my hanging pots and put it outside. You know what that pot was used as? A birds nest holder. No joke! A mama bird decided to make a nest in it. They reported that otherwise, it's usually a bird bath. I wouldn't have been able to come up with that one. I don't know much about the nesting and bathing habits of birds.

This isn't the only story I have like this, but it's my new favorite!

This dream pot is lovely! What it's used for is where the people who own it get to be a little creative. :)

I like that thought so much, it is very true, some pieces just ask to be made...

Beautiful work you have here!

I love that you dream about pottery! A kindred soul! Obsessed aren't we?! But in a good way...right?!!!!