Boom Boom: Out Comes the Form

Burn it out? Or slide it out? Burn it? Or slide it? Burn or slide? These are the things I spend my hours wondering. How best to remove the arch form, now that the brick are in place.

Burning is more fun by miles, but sliding is more practical, as someday I will need to rebuild the arch, and when that day comes, it would be nice to still have the form. So I'm sliding, if I can. It will still be necessary to burn out the frame holding up the form, so I get a little of both. Here goes!

Past the first ring of brick, which required a bolster in one place, but held... 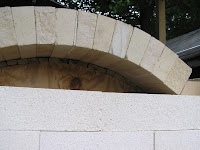 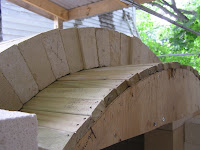 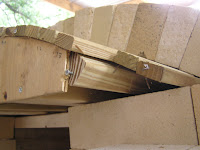 Uh-oh. Damn that quarter-inch plywood! Damn my cheapskate nature.So, the form will not survive anyway, which means Plan B is activated: Burn that baby out!

I had meant to take photos while the form was burning out, but as it happened I didn't care to set down my trusty hose once the blaze began. The spaces in front and behind the arch forn were still unbricked, so the flame was not entirely contained. A couple of notes: 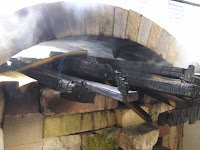 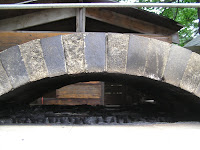