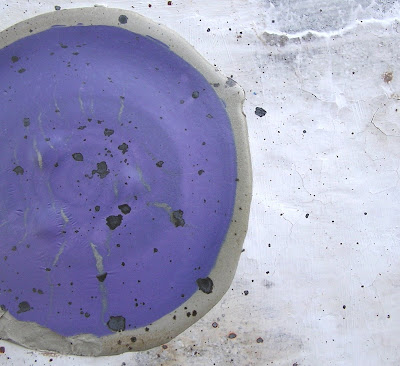 I am wracking my brains to figure out how this could have happened. Obviously, this former bowl (and two others in the same firing) was made out of a lower temperature clay than the Cone 10 stoneware that this soda firing called for -- but how? I know all were made from recycled clay; I know I used a low-fire body in my studio briefly, about a year ago, and hubby has been experimenting with a local earthenware clay. But we were very careful to keep the earthenware separate (at least, we thought we were), and it's very visibly obvious in the green state that it is not stoneware. So...I don't know. Obviously we screwed up.
The good news is that none of the pieces which I really needed from the firing were damaged, and we were able to save the shelves.
More careful in future!
Posted by Lori Watts at 3:43 AM

Wow. You weren't kidding when you said meltdown. Were they totally flat against the shelves? If so, I am impressed that you were able to save the shelves. It's things like this that make me only throw one clay at a time. Fear protects me.

Glad you lucked out, but that lavender color is wonderful - if that is what I am seeing.

Oooh, ouch. Glad it didn't damage your other VIP (very important pieces)... Like Linda says, the colors are pretty in the posted image.