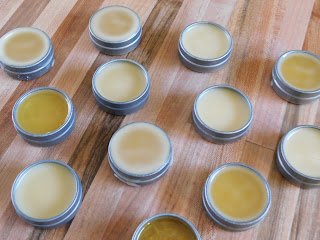 That's my recipe for lip balm. 7 parts beeswax, 4 parts coconut oil, 4 parts sweet almond oil, 1 part vitamin E oil, pluse a teaspoon of honey. A little spash (maybe 1/2 a teaspoon) of flavoring (these are chocolate) and, in this case, the TEENSIEST bit of gold mica - a bit the size of a grain of rice. I measured this batch in grams, which made 13 tins of balm. That's a lot for just us, so I will freeze most of these & bring them out as I need them.

I wrote earlier about a creative blockage I've been feeling for a few months now. It's been so hard to push myself into the studio. But making stuff? That's who I am.

The creative urge itself isn't exactly gone, though; I still feel a desire to make stuff, useful stuff. Since it wasn't working, with clay, I'm making other things: cookies, soap, lip balms. I'm not fighting the blockage; I'm going around it.

And it's working! I don't know why I've been creatively constipated specifically around clay, though I have some theories. Since I've been making other stuff, some of the blockage around clay has lifted, too. Last night I went in the studio & assembled all the leftover bisqueware - you know, the extra pieces you always have that didn't quite fit in the glaze kiln? Every firing, there's a few. I think I have enough "extra" pieces to fill a glaze by now. It doesn't take a lot of creative mojo to dip a pot in flashing slip, or to wax a bottom, or to mix up wadding, so I started doing those things. Soon I found myself humming, thinking of glaze ideas for the pots.

Beam says all may yet be well.

ETA: This mixture was still too hard! Usable, but not easily. Gonna try a 1:1:1 plus honey (Beeswax, coconut oil, sweet almond oil. Nevermind the vitamin E)