Murphy's Law is Not So Bad! 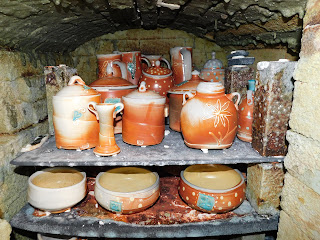 If I didn't clarify before, my last firing was only a Murphy's Law firing if Murphy's Law was about screw-ups. Everything that went wrong in this firing was something I did wrong or failed to do! It's something of a pattern: I have a few super-smooth firings in a row, then I get over-confident - or maybe lazy is the word I want here - and make things harder for myself. For example:

All in all, though, I have to say I was incredibly lucky. The soda glass is evenly distributed, the colors are rich and clear, even the exploded cone pack didn't damage anything! Most importantly, the steins that I need for Watershed's Salad Days event came through beautifully. (Enough of them, anyway! One was lost in the bisque to a separating handle, and two got the aforementioned ugly soda drips on them. that still leaves more than I need!) 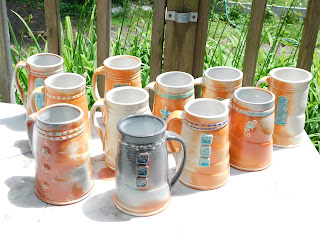 It's 87° today, so I am going to take a bit of a break from the heat. I still need to grind a few bottoms, then sort, price, and pack the pots for Belfast Arts in the Park.

Some of these pots should be available online after the 13th.

I'm gonna make some notes here about the firing schedule that worked out so well so I can refer to it for future firings:
Posted by Lori Watts at 10:20 AM

Looks like you have some good results.
Serendipity strikes again!