Last week I posted the second online the second fundraiser cat dish sale. It took a few days this time but I did manage to sell 10 cat bowls - enough so I could sponsor a cat's adoption fee at KVHS. That's the good news.

The other good news is that the cat I had planned to sponsor - Grizzle, who had been at the shelter since November, found his family before the sale was over! Which means I got to go in today & choose a different cat to sponsor.  Meet Harley! 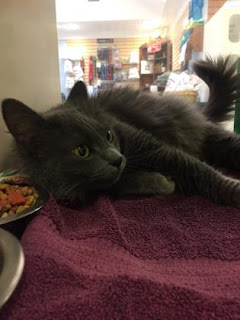 Harley is a 7 year old spayed female, with medium-long gray fur. Her details state that her intake to the shelter was March 19th, but that was because she was returned to the shelter after a previous adoption. Harley needs a family with some patience for her slow, cautious adjustment. (Sounds like a not-atypical cat reaction to a new environment to me, tbh. Some cats hide for a while until they know they are safe. General Chamberlain stayed under the bed for 3 weeks! and then only emerged when I was in the room for a couple of months after that. Nevertheless he became one of the most affectionate cats I've known.)

If you've been thinking about getting a cat, here's a chance to take home this sweet girl for free!

Still a few dishes left! I can start building towards the next adoption sponsorship.
Posted by Lori Watts at 10:37 AM

Labels: Do Some Good, Pets