After a couple of days of auto drama, I am pleased to introduce my new vehicle: 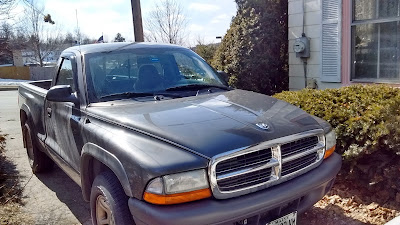 I've yet to give this truck a name, but I am open to suggestions!

I am pleased all to pieces with it, but there were a few bumps in the road getting there. In fact, we bought a different vehicle on Thursday! I didn't take it to my class in Portland, because I still had the rental vehicle, so I thought I might as well get my money's worth for it. GOOD THING!!! Because Friday morning, I took the new car- which we will call the Red Devil - less than a mile to the supermarket. When I drove back in my driveway, I noticed a puddle of oil where the Red Devil had been parked the night before. Not a drop, not a splotch; a puddle. Alarm bells!

Doug placed a clean white piece of paper under the engine and let it idle for a minute - it was covered in oil. So he put a pan underneath it and let it run for ten minutes - there was more than a quart of (thick, filthy!) oil in it. He came back in the house and suggested I stop payment on the check.

The dealer came and got it, after we insisted that NO WAY ARE WE DRIVING THIS VEHICLE. I was kinda pissed off at him anyway - I watched him put a sticker on this truck that turned out to have a major, fire-hazard-sized oil leak, so I was feeling uncharitable.

Thank heaven I didn't drive it to Portland. It would have seized up on the highway.

I still haven't decided whether to report the dealer to the State Police. I don't want to be a jerk, but I don't want somebody else to be cheated. It's a crime in Maine to sticker an unsafe vehicle:


4. Issuance of certificate for substandard vehicle.  A person commits a Class E crime if that person knowingly causes an official inspection sticker to be attached to a vehicle that does not conform to the inspection standard.

...and I don't see how he could have failed to be aware.

Anyway: if you are in Maine, don't buy a car from McKeon Motors in Gardiner.

But now: flip the script!

After those disheartening events, I logged onto the List of Craig and made some appointments for today to check out private sales, then rented a car (again!) for today. Shout out to my new friends at Enterprise Rent-a-car in Augusta, who have been so accommodating on short notice, and even found me a small discount when I had to rent a car a third time in a week.

The first vehicle I looked at was this 2004 Dodge Dakota, a 4-cylinder, front-wheel drive truck with only 73000 miles on it. This truck is pristine. Engine is virtually silent, not a drop of oil or bit of smoke out of the exhaust. In the glove box was the owner's manual with the notepage in the back documenting all the maintenance over the years. This person - an older fellow, who passed away a few weeks ago - was religious about changing the oil, rotating the tires, changing the belts. I told Doug during our test drive: "It's like my Dad maintained this car." My dear old Dad, gone more than 15 years now, was a bit obsessive about things like that. That's my excuse for being bad at car maintenance: with my first couple of cars,  I never I had to check a fluid level or tire pressure, because whatever it was, my Dad had already done it.

Coming upon this car - for a price that I could come up with in cash - is enough to renew my belief in angels. Thanks, Dad; I'll do better with this one, I promise.

In other news, I have been accepted into the Portland Fine Crafts show in August, and now I have a truck to transport my stuff!

Glad to have a happy car story for once!
Posted by Lori Watts at 10:10 AM

we almost always get cars from private parties and look and look and look before we find one inexpensive enough and clean enough with low enough miles. good you finally got a good one, will you get a campershell (topper) to store your pottery goods under cover in the bed?

A campershell is not in the cards for a while, but maybe someday.

The new truck looks great! It's so comforting to know that you will have safe travels!
Enterprize gets a big thumbs up from me too. Last time I rented a car they picked me up at the repair shop so they gave me a discount, then gave me an upgrade.........and called me to say I had left a notebook behind when I dropped off the car!

Having a real car-purchasing phobia, I didn't get a new-to-me car for 17 years...and fortunately relied heavily on my good mechanics. I bought the newer one from a friend, and sold the old one to my mechanic (he knew how well it had been kept up!) So YAY you, getting a good truck for trucking all over the place!