Love is a Clean Burner 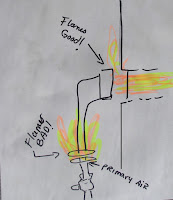 Remember my funky burner thing from last week? This one:

The consensus of my equipment-clever friends and readers was that the burner for some reason did not have enough gas pressure to create its Venturi effect. The burner was turned all the way up but the pressure definitely did not seem right, just before the flames appeared where they weren't supposed to be.

The possibilities included something -  a bit of rust or debris - blocking the tiny little orifice thru which the gas flows.

Luckily I never discovered whether that was, in fact the problem. On Monday night I had a conversation with my husband - I told him about the burner troubles and the possible fixes. You may think this is the dullest possible thing one could talk to a non-potter about, but Doug is an unusual guy. The physics of things interests him, and the kiln and burners are apart of that. I told him what our friend Tyler suggested as a remedy - taking the burner apart, removing the brass orifice plug, etc. He didn't say much, made some sympathetic noises - he knows how much I hate kiln maintenance.

When I came home from class on Thursday he had taken it apart, cleaned it all out, and put it back together! It hums along just like it should now. No more FLAMES BAD.

Now, he has taken a burner apart & put it back together before - I have an old one lying around. But that was years ago. He took apart the old one first, to remind himself, and then cleaned & thereby repaired my burner! It's sooty and gross and he barked his knuckles on the kiln brick getting it off the pipe, and now I don't have to do it.

Some guys bring you flowers and candy. Some write you poems.

Mine cleans my burners. 💗

Oh, and he writes songs. Check 'em out!

Labels: Doug's Pots, Equipment, People who are way smarter than me, Personal

Glad it worked out for both of you!