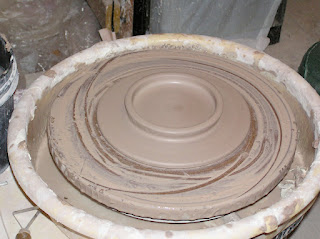 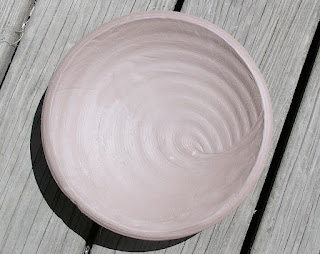 Two commenters on my last post gave me ideas to try next. I decided to combine them.

Barbara Rogers of Alchemy of Clay suggested holding one end of the wire stationary while pulling with the other, to get a different sort of mark. And commenter Schnee mentioned a video in which the foot is thrown first, and then the piece is cut off with the twisty wire, resulting in a fresh textured surface.

So I tried both. The upside-down throwing technique resulted in a flat shape, with no bowl-like depression (yeah, I know: Captain Obvious strikes again.) I haven't seen how this was addressed in the video, but I decided to put the still-wet pot over a hump mold. This mold is made of bisqued clay, so the plastic liner would not be necessary, except it has some carving on it that I wanted to avoid impressing into my plate. Edit: Here is the video! Thanks, Lynn!
Posted by Lori Watts at 11:36 AM

I enjoy the handles on the serving tray. Any tips on how to create these?

I have seen some potters untwist a wire to get a single strand and move it back and forth in a wave motion to produce an effect like this.