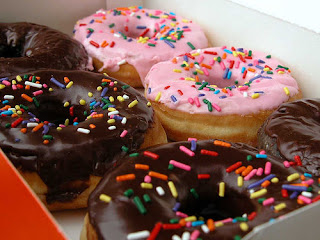 For Christmas I received, among other things, a Dunkin' Donuts gift card. (Thanks Mom!) It reminded me of something that's been tickling my brain ever since I wrote the post about the chocolate covered pretzel sticks. I mentioned in that post that my first job was at Dunkin' Donuts, and I used to amuse myself by trying to make the donuts look as appealing as possible.

What started tickling my brain then, and finally entered my conscious thought this morning as I chose a boston creme and a chocolate coconut, is this: what I was doing was visual merchandising.

Much of what worked to sell donuts could be explained as an indictor of quality. A even coat of sugar was appealing to people perhaps because it appears to have more sugar than a patchy-looking donut. Or maybe it made the donuts look fresher and less man-handled. The same could be said for smooth, shiny frosting. But other qualities were less evidently related to donut-enhancing qualities: Why are jelly donuts more appealing if all the little dots of jelly peering out of the fill-holes are pointed in the same direction? And why, if you only want two, are you more likely to buy from the tray that has 20 identical donuts on it, than the one that has five?

I don't have an answer to that but nevertheless I know that it's true. There is something about abundance that makes people want to take home part of it. Which makes me think: might we sell more mugs just by displaying more similar mugs together? When I make mugs I might make twenty or thirty more or less the same, but when I glaze and fire I try to get variety in the kiln. Maybe I would be better served to fire similar things together, so that on the retail shelves, mugs stay with their cohort.

I have seen first hand how effective visual marketing is: I could predict - nay, manipulate - what people would buy before they walked in the door. And my experience is one tiny shred of what visual marketing entails. Might be worth learning more about, if a person wanted to work smarter instead of harder.

Just a thought.
Posted by Lori Watts at 3:47 AM

Interesting thoughts! I had always worked the other way around, trying to separate pieces that were too much alike to create a little more variety in my display. Perhaps I should rethink my approach. Of course I don't have many pieces with similar decoration. Maybe I could arrange them by color...or something like that.

Yep, I think you are definitely onto something that's probably covered on page 3 of the doughnut marketers manual.
I've noticed the same principal at work at ceramic shows and gallery exhibitions. Customers can be pulled in by continuity of a collection or groups of collections. More often than not, it seems the average browser is easily overwhelmed by too much choice... but they still like finding that last boston cream hiding in the pile of jellies so go figure...

I've struggled with this myself. I've been trying to glaze and display similar colors together. I hate the garage sale look in my displays and find people are more drawn to clusters of color that appeal to them.
Mmmm.... hungry.... donuts! TTFN